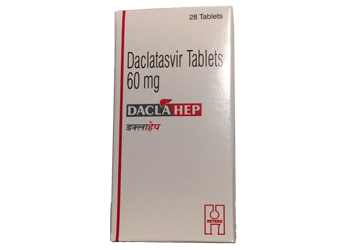 Daclatasvir, sold under the trade name Daklinza, is a medication used in combination with other medications to treat hepatitis C (HCV).[1] The other medications used in combination include sofosbuvir, ribavirin, and interferon, vary depending on the virus type and whether the person has cirrhosis.[3] It is taken by mouth once a day.[1] Common side effects with sofusbivir and daclatasvir include headache, feeling tired, and nausea. With daclatasvir, sofusbivir, and ribavirin the most common side effects are headache, feeling tired, nausea, and red blood cell breakdown.[2] It should not be used with St. John's wort, rifampin, or carbamazepine.[1] It works by inhibiting the HCV protein NS5A.[3] Daclatasvir was approved for use in Europe in 2014 and the United States and India in 2015.[4] It is on the World Health Organization's List of Essential Medicines, the most effective and safe medicines needed in a health system.[5] As of January 2016 a twelve-week course cost around $63,000 in the United States, $39,000 in the United Kingdom, $37,000 in France, and $525 in Egypt.[6] Medical use Daclatasvir is used only in combination therapy for the treatment of hepatitis C genotype 1, 3, or 4 infections; the agents used in combination, which include sofosbuvir, ribavirin, and interferon, vary based on the virus genotype and whether the person has cirrhosis.[2][3][7][8] Based on animal models, daclatasvir is not shown to cause adverse events at levels used in humans; however, combination therapy with ribavirin is contraindicated in pregnant women and male partners of pregnant women.[2] It is not known whether daclatasvir passes into breastmilk or has any effect on infants.[2] Breastfeeding is safe and does not transmit HCV, however, the CDC recommends avoiding breastfeeding if the infected mother's nipples are cracked or bleeding.[9]